Saya U Duang Ni’s long and prolific career in Lethwei has been a lifelong pursuit despite the highs and lows of the sport. In this new interview, he shares with us his early years as a competitor and his eventual transition to working behind the scenes, not only as a prominent jurist, but as one…

On February 1, 2021, the Tatmadaw, or Burmese military, staged a pre-dawn coup and took control of the country following a general election which Aung Sun Suu Kyi’s NLD(National League for Democracy) party won by a landslide. By evening, most of the country’s civilian leaders, including Aung Sun Suu Kyi, were put under house arrest, and a new cabinet was put in place by the Tatmadaw.

Saya U Moe Pa Lae passed away on January 21, 2021 – after suffering from a prolonged illness. My fond memories of him go back to earlier times in Yangon where we first met. At the time, he was still an active competitor. Years later, we were able to meet again at his camp to…

Saya U Duang Ni – known as “The Red Peacock” – is one of Lethwei’s most charismatic and colorful senior officials in the sport today. 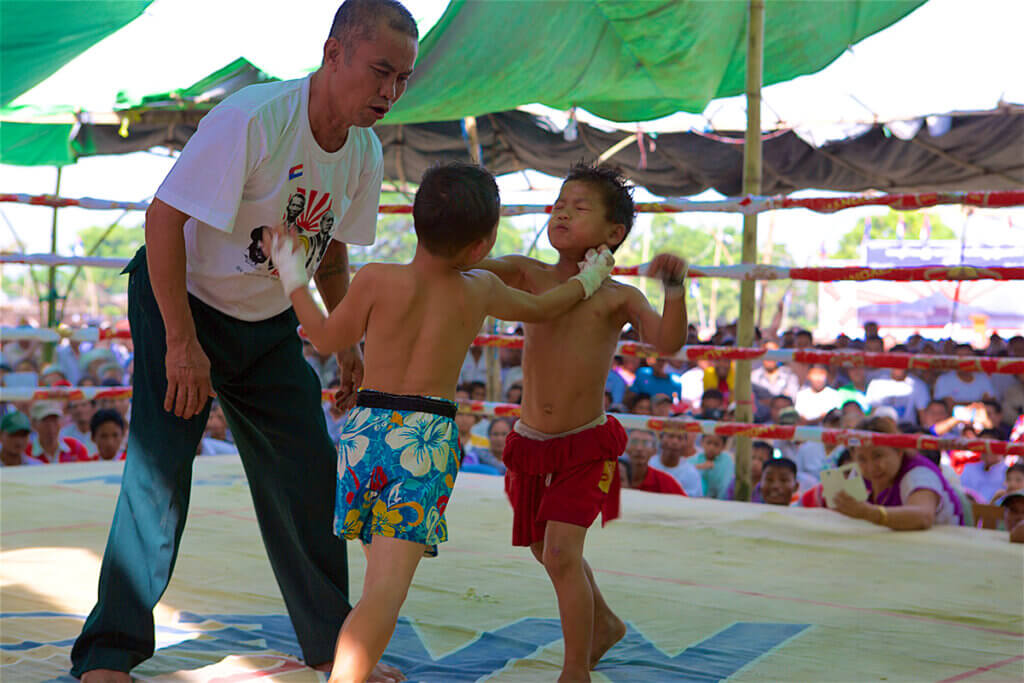 by Vincent Giordano
Burmese Lethwei, or Myanmar traditional boxing, is an ancient bare-knuckle fighting art that has survived in Myanmar despite decades of endless violence and governmental control. At times, this control threatened to wipe out Lethwei’s very existence, but the sport survived partly because rural communities throughout the country continually staged Lethwei tournaments during the celebrations and holidays that fill Myanmar’s calendar year. Including bare-knuckle matches as part of each celebration is a firmly embedded and accepted tradition within Myanmar. Central to these celebratory tournaments is the idea that, long ago, young boys engaged in Lethwei matches to display their fighting skill, courage and bravery. It was part of a rite of passage into adulthood.

Saya Win Zin Oo is the founder and senior coach of Thut Ti Lethwei Club in Yangon. He is prominently featured in the Born Warriors documentary trilogy, as well as many other television specials and documentaries focused on the art of Lethwei. Saya Win’s deep understanding of Lethwei, alongside his ability to work across cultural borders, has made him a highly respected global ambassador for the sport.

U Sai Zaw Zaw has been Lethwei’s top promoter since he entered the sporting arena close to three decades ago. He has organized and promoted well over 100 international and national fights, beginning with the historic 1993 challenge match between Shwe War Tun and Aung Aung Tun in Aung San Stadium. His innovation and success continued with the creation of the first Golden Belt Tournament in 1996. His vast international reach includes over 15 Myanmar vs. Thailand fight cards, two Myanmar vs. Japan fight cards, and one Myanmar vs. Philippines fight card. His other tournaments have included fighters from as far away as Russia, France, Iran, Switzerland, Mexico, Japan, England, New Zealand, and the United States.

Saya Win Zin Oo is the Founder and Senior Coach of the Thut Ti Lethwei Club in Yangon. He is a familiar face to our audience, having appeared throughout the Born Warriors trilogy. In this interview, he brings us up to date on his newest projects, and the current state of Lethwei.

U Sai Zaw Zaw has been Lethwei’s top promoter since he entered the sporting arena close to three decades ago. He gives us an inside look at the business of promoting in a changing Myanmar landscape, his toughest challenges, and his hopes and plans for the future.

Our newest interview features Soe Than Win, who has been one of the leading Lethwei promoters since the 1990s and is now Vice President of the World Lethwei Championship organization. He discusses the many challenges he faced while promoting Lethwei matches in the past, and what the future holds for the sport.